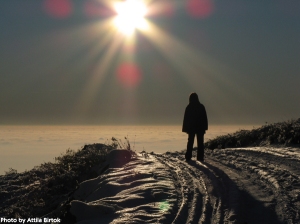 Are we missing something?  I have worked with college and seminary students for about twenty years now, and I am alarmed that the concept of “call” is on the endangered species list.  In a recent conversation about “call to ministry,” I actually had a second year seminary student come to me and ask me what I was talking about.  This woman told me she never had a sense that God was calling her; she simply loves the Bible, the church and people so she made the “decision” to “try” ministry.  When I speak to laity about call, most of them look at me funny and say, “well, no, I don’t want to be ordained.”  What has happened to our understanding of “call” to ministry?  Laity don’t think it is for them, and a growing number of clergy candidates don’t know what it is.

A few years ago I worked with an annual conference on clergy morale.  Of the almost 400 participants in the program, over 300 expressed a sense of “call” to ministry.  We defined a “prophetic call” as, “a fundamental belief and assurance that God will use my skills, gifts and talents to accomplish God’s work and will in the church and in the world.”  This definition was crafted by the participants to describe what they felt their own call meant.  However, we explored the question: “how well do you think your current service reflects this calling?” and the majority felt that the “church work” they were doing in pastoral ministry had less to do with God’s will than the will of the people they served.  For most, it took less than three years in the local church before they felt they were pursuing something other than the original call they felt on their lives.  Countless stories of calls to ministry for preaching or healing or social transformation that were subsumed by focus on conflicts and carpets and copiers and comfort were shared.  A large segment of pastors who feel called to ministry also feel they have somehow strayed from the will and vision of God.

One study I led interviewed clergy who left the ministry before retirement.  A lop-sided 62% of those who burned-out and fled reported that they never had a call to ministry, but that it was a career choice.  One of my professors once told me, “if there is anything else you think you could do besides ministry, go do it.  The life of the ordained pastor is for those who know in their hearts that there is nothing else they would rather do.”  Would that we could all find such assurance.

Another change I note regards reinforcement and encouragement.  When I was in college, I had no fewer than seven clergy and a handful of laity approach me to ask me if I had considered ministry for my future.  These were people who knew me, worked with me, discerned in me gifts for ministry, and they encouraged me to pray — and they prayed with and for me — for God’s guidance.  For the last few years I met with Vanderbilt Divinity School students, I asked who was encouraging them in their ministry path, and I was distressed to find that most had made the decision for ministry on their own with no encouragement of affirmation from family, friends, of communities of faith.  Many seminary students report that they don’t pray about their decision (there is an unsettling attitude that prayer is not important or helpful) and that they simply feel they are going to be good at it.

Many young clergy and a large number of laity report that the concept of call isn’t talked about, preached about, or taught in their churches.  “It’s quaint,” reported one pastor who feels that a call is just a form of delusion.  “It is a carry over from a more superstitious and simple time.  God isn’t out there choosing a team.  God has more important things to do.  People who say they were “called” to ministry are just trying to validate their own decision.”  Another pastor chimed in, “Being called to ministry is just an old way of explaining the sense that this is the right thing to do.  Everyone has a sense of “calling” to things they are passionate about.”

I wonder.  I personally experienced a calling, and one of the reasons I trust it is that it was NOT what I was planning for my own life.  I do feel that this is God’s idea, not mine.  I did feel a firm, but gentle reorienting of my life into ordained ministry.  It was “real” for me, and it has sustained me through many difficult times — the kind of situations many people without a sense of calling report as decisive in their decision to “leave” ministry.  Those with a sense of calling appear to be better equipped to handle the pressures and stresses of ministry, and it worries me that fewer and fewer clergy and laity take the idea seriously.  I believe we are in trouble if we all the sense of divine call to go the way of the typewriter, the transistor radio, and the 8-track tape.  At least in those cases, something better came along to replace them.  I wonder if there is anything better than God’s own call on our lives…