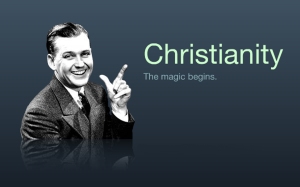 I won’t share the convoluted audit trail that leads to this post, but a series of unrelated incidents all point me back to this particular story.  When I was in Nashville, I related to a young, well-meaning Christian who went from ultra-committed and ultra-pious to uber-atheist in the blink of an eye.  When I was going through my own divorce, he invited me to lunch to try to talk me out of it.  He patiently informed me that this was the most heinous of sins, I would never be forgiven nor forgive myself, that I was tempting God and risking eternal damnation.  I honestly believe he was doing this from a deep well of concern and a weird form of kindness.  He held a very clear and simple vision of Christian faith — do what is right and God will bless you; do what is wrong, and watch out!

It was not a full six months later that we sat together in reversed roles.  He and his wife lost two children in a very short period of time — one to illness, one to depression and suicide — and the strain was too much for their marriage.  They were engaged in a sad separation on their way to divorce.  My young friend spat out his anger and frustration: “The IS NO God.  If there were a loving God, He wouldn’t be doing this to me!”  I tried to temper his responses, but it was no good.  He was through with God, because God wasn’t treating him fairly.  His life, when placid, calm and stable meant God was blessing him.  His life turned upside down and filled with tragedy, pain and suffering meant there could be no God.  There was nothing I could say that he wanted to hear.  His myth of the fairyland called “faith” had been destroyed.

Faith as commodity exchange or a Skinnerian psychology experiment has never made sense to me.  Cries of “why is God doing this to me?” or “why does God allow this to happen,” simply make me feel like the people uttering such feelings haven’t really been paying attention (and they have certainly never read and reflected on the Book of Job…).  Certainly, we have always witnessed a simplistic and less mature faith of direct intercession, meddling and manipulation on the part of a slightly sinister grandpa-God in the sky, but that is caricature not Creator.  It is part of the human reality that the human brain attempts to simplify complexity in order to make things easier to understand and accept, but reducing God to a divine entity responding to each and every whim of the human race is nothing more than ignorant hubris.  It says much more about us that it does about God.

But before I get too carried away with “what everybody knows or should know” let me pull it back to what I believe and have experienced.  A deep and mature faith, in my experience, does not allow the believer to invoke magic powers and miraculous results, but gives the believer inner conviction and strength.  The prayers of those with a deep faith are less about having God perform to their satisfaction and more about preparing and equipping them to deal with whatever might come.  It isn’t that God magically removes the negative from their lives, but that they develop a faith-based worldview that allows them to rise above everything they face.  I have known people “miraculously” healed of cancer, and I have known deeply faithful and faith-filled people who died from cancer.  For me, the true miracle are those I have known with cancer who died with grace and acceptance, who witnessed to the real power of faith in the face of adversity.

I listened to a conversation in the next booth of a diner that made me both smile and feel a bit bad.  Two women were chatting, and one mentioned that she felt very guilty because she has been praying for rain to end our drought, and now we were having flooding and more rain is on the way.  Her friend told her that she should be more careful, and she asked if her friend had been very specific about how much rain she wanted.  The first woman burst into tears and confessed that, no, she just prayed for rain every day, and now she was afraid that she was responsible for terrible problems.  Her friend was at a loss for words, then said, “Well, maybe we should pray for the rain to stop.”  Quickly, the first woman responded, “But how will we know it won’t make things worse?”

These two women believe in the power of prayer, but it is a stunted and immature belief.  Prayer is a holy work-order, delivered from the lips of the believer to the ear of God — with a sense that God is a severe literalist, never employing common sense but acting like the magic in the Sorcerer’s Apprentice, delivering much more of what is asked for than is healthy.  What kind of God would do this?  Does God keep a running tally sheet of all those who pray for rain versus those who pray for clear skies, granting the wish of the majority?  Does God really wait to hear the prayers of some in the path of a tornado in order to know the very best place to turn it to smite the sinners?

So many people base their faith or lack of same on how well God does what they tell them.  “God let my wife die, therefore there is no God.”  “There is so much suffering in the world, that proves there is no God.”  “If there were a God, the world would be a more loving place.”  “If you really loved me you’d let me eat candy for breakfast.”  Oh, no, that last one is a petulant 3 year old…

We live in a world that I believe God created.  In this creation are many marvelous things.  The natural order and all the governing laws of nature are phenomenal.  The complexity and intricacy of the created order is astounding.  And for it all to exist, some of it is fragile, and some of it is dangerous, and some of it is corrupted, and some of it can be easily manipulated to turn good into evil.  The creative potential of the human mind is not value neutral — some intentionally use what they have been given for good, some for bad.  Some choose to heal, some choose to injure.  There are some who see others and would never, under any circumstances, seek to do them harm.  There are still others who will take their creativity to make a bomb, and if they cannot make a bomb, they will buy a gun, and if they cannot get a gun, they will find a knife, a stick, a rock, or they will simply turn their own hands into a weapon.  Some exist to create; others to destroy.  Faith doesn’t change this.  Belief in God doesn’t make any of this less true.  What an authentic faith provides is a way to navigate the good and the bad, the holy and the evil, the positive and the negative.  It internalizes the Spirit so that we become less reactive.  We are able to stand firm and believe no matter what happens around us.  The ground of our faith allows us to NOT be tossed too and fro by the vagaries and chaos, but instead to stay strong.  Bad things will happen in life, even to the best among us.  Thanks be to God for a faith that immunizes us and allows us ultimately to proclaim “Thanks be to God.”