The Law of Unintended Consequences

Once upon a time, there was a small village of about 100 people.  For as long as anyone could remember, the population had remained essentially the same.  Each year, on average, seven babies were born, but due to poor conditions five of them died in infancy or early childhood.  Two elderly villagers (those around age 50) also died, so the growth rate was constant — around zero.  This actually worked out, since the resources of the village only supported about 90 people comfortably, and any significant growth would cause tensions with surrounding villages.

One day, some outsiders became aware of the tragedy of infant mortality in the village, as well as the fact that the elders were dying prematurely.  With clean water, some basic medicines, and some rudimentary education, “unneccesary” death could all but be eliminated.  Through the kindness and generosity of these outsiders, the sanitation of the village improved, pain and suffering diminished, and lives were saved.  And everyone lived happily ever after…

…for a brief time.  With elders living longer and a baby boom occurring, the already inadequate resources were stretched to insupportable limits.  Babies survived, but children suffered malnutrition and in extreme cases,

starvation.  Some children, generally females, were abandoned or sold.  Boys were set to work (or sold) at young ages.  Tensions between competing villages escalated, often erupting in violence.  Tribal violence transformed into warfare.  Ten, eleven, and twelve year old boys were trained in militia units — many placed there by parents hoping their children would get adequate food and clothing.  It was not unusual to see children walking around with semi-automatic weapons.  Within the village, street gangs formed, fighting for precious resources.  Teenage mortality hit all time highs.  Violence against the elders increased.  All of these things unintended consequences of the kindness and generosity of outsiders seeking to eliminate infant mortality.

This story is a variation of one that a professor of sustainability at Vanderbilt University shared with me in 2007 when we were discussing the “Nothing But Nets” project and the campaign to wipe out malaria-related deaths.  He told of the effectiveness of U.S. religious efforts in the seventies to clean up the water and eliminate childhood diseases, and the subsequent results in the eighties, nineties, and early 21st century of widespread hunger, violence, and instability.  In the past year and a half, I have had three more similar conversations — with professors from Duke and Berkeley and Africa University — all explaining comparable situations.  In every conversation, the main concern is what happens when we treat symptoms without addressing the root causes.  Death by treatable disease is a symptom of dual problems of widespread poverty and poor (and often corrupt) governmental management.  Without addressing poverty and the governing issues, treating the symptom causes as many problems as it solves.

When I wrote this last year, I got criticism from inside the church that I was “against” Nothing But Nets and helping dying children.  This is both unfair and incorrect.  The point I made then and the point I make now is that if The United Methodist Church is going to start down this road, we need to understand exactly what we are getting into and be honest about what it will require.  Denominational officials talk about raising millions of dollars to all but eliminate malaria, but after talking with an economic development officer from Mozambique I gained a slightly different picture.  My new friend, Peter, told me that it costs about $72,500 to raise each child to adulthood, providing them with basic necessities and education.  With our current goal of perhaps saving 7 million lives, the price tag will be (at minimum) approximately $507.5 billion dollars.  You can’t just eliminate infant mortality, then walk away.  There is nothing Christian in that.  Just as the birth of a child is the beginning of the commitment and not the end, so too giving life to a child who would otherwise die is the first step in a lifelong responsibility, not a final step. 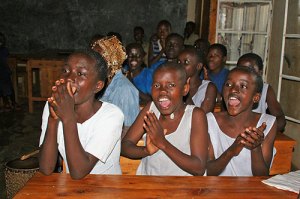 So, the point isn’t that we don’t do anything, but that we realize that to do this well and responsibly means that it becomes one of the highest priorities of our church and that we stop doing a lot of other things.  It will take a lot of work — organization, training, investment, advocacy, and sacrifice — to truly eliminate the ravages of poverty and corruption that holds people in such oppressive and degrading circumstances.  Our thinking cannot possibly be Nothing But Nets, because there needs to be a lot more than just nets to not just give life, but to give life abundantly.

I decided to bring this up again because of a very interesting disconnect: leaders inside the church disagree with me that this is an issue, but I continue to receive letters and emails from university professors, development leaders in Africa, and students agreeing that this is an important issue.  I heard from a student at Africa University who read my posts, thanked me for addressing the issue, and wants to know how the leaders of the church are responding to my concerns.  I had to tell him, quite frankly, that they are not responding to my concerns.  In fact, I have been told in no uncertain terms that I’m wrong and that I am looking for problems where no problems exist.  To be honest, I don’t know the whole story — I am merely sharing what people have said to me.  And having an economics background, it makes a lot of sense to me.  Simple solutions to complex problems rarely solve anything.  Is saving lives important?  Of course, as long as you follow through and sustain, support, and improve them as well.

We, as United Methodists, have taken on a critically important work — to save lives.  This is what we should be doing.  But we need to understand that it is a huge undertaking.  A marketing expert who works with non-profit charities around the world helped put it in perspective for me.  He said that he looks for things that will be successful.  Anything with children is pure gold.  Anything that offers a tangible outcome — like malaria, which can be

beaten — is very attractive.  But he said that the challenge is the American psyche — we don’t stick with anything for very long.  We have a short attention span, and we lose interest quickly.  We need something dramatic.  We want something that tugs at the heart.  Problems that can’t be solved, enemies that can’t be defeated, diseases that can’t be cured — these things are hard to “sell.”  Luckily, The United Methodist Church isn’t in sales, but salvation.  We aren’t about quick fixes and simplistic solutions.  We are about relationships, and we have made a pledge to pursue global health and to fight poverty.  These are amazing promises — ones by which we will be judged for years to come.

Categories: Mission of the Church, Missions, The United Methodist Church