Witnesses to the Mystery

My wife, Barbara, is a mystery to me.  She loves me in spite of all my shortcomings, demands, infirmities, and idiosyncrasies.  She is so smart, dynamic, funny and balanced.  I really don’t deserve her… and she certainly doesn’t deserve all the garbage she gets from me!  And yet she loves me.  Ah, sweet mystery of life.

What is life without some decent measure of mystery?  There are aspects of our existence that simply defy simple (or even complex) explanation.  These aspects of life are not irrational, but they are definitely trans-rational — beyond any rational, scientific or reasonable explanation.  Take justice for instance.  Everyone knows there is some undefinable standard by which we believe fairness, equity, and righteousness is served, but what it is exactly, well, that’s open to debate.  For some, justice is fair treatment for all, while for others it means retribution.  Some find injustice in the taking of an innocent life, but justice in taking the life of a criminal.  We proclaim “justice for all,” but most of us are satisfied with “justice for some.”  Grind all of creation down to a fine powder, scrape up the residue and put it under a microscope, and you won’t find one scientifically provable molecule of justice, but that doesn’t mean it doesn’t exist.  While we may disagree on the exact definition of justice, we all believe that justice is.  Sometimes we know something is real, even when we can’t prove it.

The same goes for faith in God.  Oh, certainly there is a popular debate over the validity of “religion,” and the fact that there is no “proof” of God, but that is the controversy of little minds and petty hearts.  Over the course of human history — whether that is measured in thousands, tens of thousands, or hundreds of thousands of years — belief in something larger, something more, something better, something holy and divine is undeniable.  Can billions of people all be wrong?  (Maybe, but that’s really not the point, either.)

There is more to life than meets the mind, and the ability of human beings to completely comprehend it.  And that drives a lot of people crazy!  Those of the scientific community who challenge the church to “prove the existence of God” obviously don’t understand the definition of the word, “faith.”  (And, apparently, don’t have enough to do — or simply lack the intellectual capacity — in exploring the complexities of those things that can be divined by science.)  The metaphysical seems to be a personal affront to those who choose to dwell in what is completely knowable and known.  Those in the religious community drawn into this dead end debate also miss the point.  Such things as love, peace, justice, mercy, compassion, conscience, and yep, even God, are unlikely to find “scientific” explanations.  Sure, they may simply be the byproducts of the interaction of meat, chemicals, and electricity coursing through the human brain, but that begs the question — why?  What good are they?  Why are they, at all? 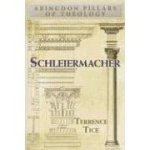 Barbara (my wife), inspired by an earlier post of mine, Root Rot In the Theological Tree, picked up a copy of Terrence Tice’s wonderful (brief) introduction to Friedrich Schleiermacher in the Abingdon Pillars of Theology series (Schleiermacher) and in her reading came across this wonderful quote and brought it to my attention:

“We Christians are but witnesses.  We are not called to be the bearers of full, certain knowledge regarding the mystery of God.” (p. 33)

Good old Schleiermacher, a fairly cynical and rational thinker at the best of times, believes that Christians are witnesses to the manifold grace of God in Jesus Christ and the revelation of God’s Holy Spirit, and that the confirmation of our faith is abundant, but he also acknowledges that what we believe is not something we can turn around and prove.  We don’t know enough.  We are limited.  We are temporal.  We are incomplete.  Faith isn’t about certainty, it is about belief based on evidence.  It requires us to “know” truth in fundamentally trans-rational ways.  Like a good joke, if you have to explain faith it misses the point.

For thousands of years great minds have attempted to understand God — to explain God using human, transitory, incomplete, and inadequate terms.  For thousands of years we have failed.  The moment we decide we absolutely and irrevocably understand God’s mind and will for all people in all places at all times, we prove that we lack faith and have virtually no real understanding.  We pursue knowledge at the cost of wisdom.

The “whys” and “hows” of God never transcend our contextual limitations.  Tribal, superstitious, premodern people’s see an eclipse.  What does it mean in the absence of a knowledge of astrophysics?  Big God in sky unhappy!  In our own age?  A phenomenal illustration of immense power and an incredible creation that allows for a limited scientific explanation and a bolstering to a faith in the incredible majesty of the divine.  Illiterate, uneducated, and primitive people witness the death of the majority of their village.  God must be punishing them.  Modern, educated, scientific cultures see the complex interplay of bacteria, hygiene, and medicine.  Problem addressed.  Proof or disproof of God?  Nope — not in either scenario.

Reducing God to our level is a loser’s game, and not one the church should waste a great deal of time on.  Nor should we undermine our credibility by denying what we are learning with our God-given minds through science.  Our God is a God of mystery and wonder.  We do not KNOW how to explain everything that occurs in nature, but that is not our purpose.  Science has given us incredible power to understand the workings of creation — the “what” and “how” of the world is being discovered and described in amazing detail.  The “why” remains a mystery.  Our faith is our best attempt to make sense of the “why.”

The trans-rational aspects of human existence are important.  The church of Jesus Christ has a valuable and important opportunity to focus on those things that science will never be able to reduce to formulae and equations: justice, mercy, compassion, love, forgiveness, peace, and reconciliation.  Instead of wasting so much time trying to arrive at moronic certainty about who is right and who is wrong, who is acceptable and who should be shunned, who is holy and who is profane, we should be marshaling our forces to witness to the glorious mysteries of God who desires unity, wholeness, grace, restoration and redemption of all creation.  The things that give life meaning — our relationships based in mutual respect, kindness, sacrifice, generosity, patience, compassion, etc., really don’t make sense.  That doesn’t mean they aren’t true.  We are not a people of certainty, but a people of faith.  We are not charged to have all the answers.  We are invited to be witnesses to the grand and glorious mystery of our God and faith.