If I hear another middle class beneficiary of white privilege talk about “sufficiency” I am going to throw something!  Of all the pretentious, patronizing, and paternalistic (even though many of the voices are female) perspectives our blessed leaders could take, none are more disingenuous.  Such platitudes as “living simply,” “doing with less,” and “being content with what we have,” ring very hollow when spoken by children of privilege and power.  Who are we trying to kid?  Only people who have a lot have the luxury to talk about simplifying.

I listened to an upper-middle-class white woman drone on about how we shouldn’t talk about abundance and scarcity, but about sufficiency.  Abundance makes us think there is enough for everyone and that we should get as much as possible, but that sufficiency pushes us to ask “how much is enough?” and to live within our means.  This line of thinking is predicated on spurious logic and a skewed cultural context.  Only if you define abundance as “greed” and sufficiency as “satisfaction with adequacy” can you make this work.  Abundance is not just about “more.”  And sufficiency isn’t simply about “enough.”  In our world, there IS more than enough for everyone, and consumption is a justice issue, but “sufficiency” won’t take us any place new.  Many people will never feel that what they have is adequate, no matter how creative we get with language.  Playing with language is an idle pursuit of the leisure class anyway.  Real change is the core issue, but even then my doing with less is no guarantee that someone in greater need will benefit.  Plus, my freedom to choose to do with less is part of the problem, not a significant part of the solution.

When I studied economics there were a few basic rules of economic justice that were unassailable.  In this world, there is a very clear line between true “haves” and “have-nots.”  Those who live in a culture of abundance are characterized by four freedoms: the freedom of choice, the freedom of movement, the freedom of discretion, and the freedom of distribution.  In other words, we have options for our spending, we can go where we can afford to live, we can determine how extravagantly or simply to live, and we can choose to give, save, spend, invest, or throw our money away.  In a 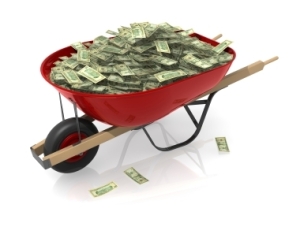 culture of box stores, gambling casinos, vacations, fast food restaurants, etc., how dare anyone in the lower-middle-class on up talk about sufficiency.  Our minimum standards so far exceed the majority of our planet we should cringe with shame.  To proudly crow that we drive a used car or shop in second-hand stores or work on an older computer simply means we are nuts, not noble.  Our freedoms to shop where we want for what we want, to give or not to give, to buy to own, to eat out in restaurants or stay in hotels (even budget hotels) place us in the abundant elite.  In our own country, the average family BELOW the poverty line owns 1.3 automobiles, 1.8 televisions, cable or satellite, a DVD player, a computer, a microwave oven, and 1.7 cell phones.  Forty-six percent own their own homes, and seventy-six percent have air conditioning.  Ninety-seven percent eat at least three meals a day.  In any third-world or developing country in the world, these statistics would reflect affluence.  Here, you would think they would at least reflect “sufficiency,” but alas, not so.

Abundance and scarcity are descriptive terms, not exact measures.  At their best they describe states-of-mind or “mentality.”  Many materially poor people possess an amazing abundance mentality.  Too many materially affluent people embrace an unbelievable scarcity mentality.  Shifting a mindset from one of scarcity and want to one of abundance and gratitude is a fundamental tenet of good stewardship.  I have friends who own boats, luxury cars, expensive homes, take month long vacations and all they can talk about is the uncertainty of their financial future.  I also have friends who live from day to day, sometimes skipping meals, having to move frequently because they can’t make their rent, and they are blissfully happy, unconcerned about the future, and creatively discovering new ways to make ends meet.  They have “enough,” but it goes much deeper than that.  The amount possessed by both types is completely unrelated to their sense of “sufficiency.”

I don’t think we should shy away from the concept of abundance.  If our God was a God of sufficiency, the wine at the wedding at Cana would have sufficed, the loaves and fishes would have sufficed with no baskets left over, and the post-resurrection catch of fish would have been something less than 153.  Abundance and providence go hand in hand.  Enough is never good enough.  Abundance is given with a purpose — to see what we will do with it.

Ultimately, abundance is a justice issue, not a matter of individual material possession.  Greed is unjust.  Hoarding is unjust.  Grasping after wealth is unjust.  Unequal distribution is unjust.  Investing in organizations that withhold from the poor to gain riches is unjust.  Intentional injustice is evil.  This applies not only to the faceless powers and principalities of the age, but to every person living on the planet.  One goal of authentic Christian community should be justice, including the open, free sharing of what we have with those who have less.  Paul expresses it elegantly in 2 Corinthians 8 & 9 — those of us who have share with those who don’t, assured that if (when) the roles are reversed, others will share with us.

In the United States — especially within mainline Christianity communities — there is virtually no reason not to talk about abundance and justice.  Certainly we have people who struggle with money — most of them have placed themselves in financial difficulty.  Certainly most of our people don’t want to give more, and they don’t want to feel guilty about not giving generously, but that doesn’t mean they don’t have resources to give.  We live in the most affluent culture in the world, enjoying an abundance unimagined by most of the world, yet hold fiercely to a scarcity mentality.  May God forgive us for such ungrateful and selfish behavior, and please, let’s stop confusing the issue by playing with words.

Tagged as: Money and the Church, Values