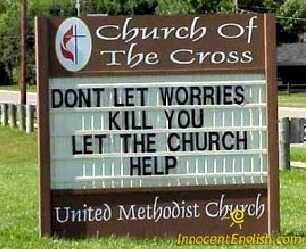 No one sets out to offer vacuous, insipid, superficial, or self-absorbed worship.  Pastors and lay leaders both dedicate themselves to creating meaningful, spiritual and authentic worship experiences.  Yet, at a gathering of 21-29 year olds who have “given up on church” that took place in 2007 , these were the top four reasons given why they didn’t like worship in The United Methodist Church.  Forty-one young people agreed to attend four different churches for a month in Atlanta, Houston, Denver, and southern California.  They filled out survey forms sharing their thoughts.  Out of 158 responses, 13 were positive, 29 were neutral, and 116 were negative.  All the participants were twenty-somethings who had left the church within the past five years, but who still consider themselves committed Christians.  Selections were made at random with the help of researchers in the four geographic areas.  (This was one part of the larger Spiritual Seeker study begun while I worked for the General Board of Discipleship).

Everything felt forced and phony.  It was superficial.  I’m not sure the preacher actually believed anything he was saying.  He seemed bored by the whole thing.  The singers were bubbly, but even that seemed plastic and fake.  We got there early and listened to the musicians warm up and all the sappy stories were all rehearsed with exactly the same inflection.  And this was the best worship service I have been to in months.

We talked about the word ‘vacuous’ in English.  It means ’empty’ and that is exactly what I felt after sitting through this service.  I felt this way last week, too.  You know?  I don’t think it is all the churches.  I don’t expect very much when I go to worship.  To me, it’s all just a show anyway.  I enter worship feeling empty, and I really hope something will inspire me or make me feel the Holy Spirit.  I think when I don’t get that it makes me leave feeling worse than when I got there.

Know there’s very little different between ‘inspired’ and ‘insipid?’  So, this is a near miss.  It got close to inspired once or twice.  It was insipid most of the time.  It’s why I quit.  Insipid music, insipid musicians.  This church is known for its music?  No.  I don’t believe it.  It is beyond bad.  Preacher was funny.  The ‘drama’?  Insipid.  It was ten good minutes that took an hour-and-a-half.

Oh God!  What self-absorbed needy people.  That woman who wept the prayer should be shot.  How fake.  My God!  If they had been any more sincere they would have crumbled to dust.  And screaming?  That doesn’t make something more true.  I grew up in an AME church.  I know good preaching.  THAT was NOT good preaching.  That was putting on airs.  My God!  What egos.  That was embarrassing from beginning to end.

These are four representative comments from over 100 lamentations of the state of worship in United Methodist churches — some of them fairly well known.  But the story doesn’t stop there.  It is easy to take cheap shots and criticize.  But read some of the summary comments that we gathered at the final debriefing of the study.

I never knew how much I miss worship.  This month made me miss it even more.  I would love to find a simple, honest little church where the worship was real.

You know?  There is a very thin line between good worship and bad worship.  When leaders get in the way of God, it is always bad.  The one church where the lady led us through the prayers and the hymns and told us about the traditions was really cool.  I would go back to that church.  It meant something to worship in that church.

In three of the churches we went to, if you got rid of the singers and the preacher it would have been a good church.  The prayers and the Bible reading and the songs we did together were really good.  It was when people up front took over that it all went to hell.

I didn’t like the churches that try so hard to be like everything else in the world.  Where it felt different, you know, where it felt holy — I think that’s good.  I think that is what worship is.  A place to be holy.

I don’t get what ministers think worship is.  Is it about them?  Is it about the congregation?  Is it about learning about God?  Is it all basic, simple stuff?  Is it supposed to connect us to God?  Nobody seems to know what we’re doing or why.  The one church where they explained the prayer and the faith affirmation and took time to talk about how the Bible was written helped me understand why I was there.  And that was the church where the whole message was about God and what it means to be called.  That was the church worth going to.

I’m jealous.  Other people had a good experience and all mine were $#!++^.  I so want to find a church where I feel close to God.  I grew up in a great church.  It was small but it was so good.  We did good things for the community and when we gathered on Sunday it was with a sense of real pride and purpose.  People felt good about their faith, so they worshipped with joy.  Everywhere I went people just looked dead, tired, or bored.  I would give anything to find a church full of committed people again.

You know, I remember the bad preachers much more than the good ones.  Good preachers are almost invisible.  The message is more powerful than the messenger.  Preachers that draw all the attention to themselves?  Not good preachers.

As I found, reread and reflected on these notes today, it struck me how many young people have good, fond memories of church, or deep desires to find a meaningful, authentic worship experience.  I have no idea what value might be found in these quotes, but for me, they offer an invitation to pause once more to think about the difference between worship that connects people to God and worship that misses the mark (…remembering that the definition of “sin” is “to miss the mark”).