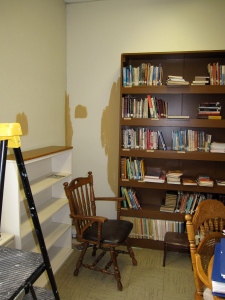 Loving books, God and the church impels me to look at local church libraries whenever I visit a new place.  Were we to view church libraries as a “witness” to a church’s learning and beliefs, we would generally be misled.  Church libraries are odd little repositories for an eclectic and uncritical assemblage of writings and ideas.  Many churches do little or nothing with their libraries, and in fact in about one-in-ten the last new title was added sometime in the late 1970s (usually by Billy Graham or Robert Schuller).  Only about one-in-three church libraries I visit is “active” in the sense of people actually borrowing and returning books, new titles being added regularly, and some kind of organization and display of featured titles employed.  Here are some observations (and questions raised) by my visits.

Somewhat surprisingly, at least to me, is the ubiquitous presence of the “Left Behind” series in UM libraries.  Not only their presence, but these are well-thumbed books from start to finish.  I have yet to find any way that these books align with anything United Methodist, but alignment with UM theology has little or nothing to do with the books we place in our libraries.  Other prominent books are Joel Osteen’s “Gimme, gimme God” books; Rhonda Byrne’s, The Secret; 47,613 copies of The Shack; lots of Purpose Driven Life; carloads of James Dobson “spare the rod, spoil the child” parenting books; oodles of Five Love Languages and its mutant children; stacks of RichDad, Poor Dad; a wealth of Tuesdays with Morrieand other Mitch Albom books;  multiple Prayer of Jabez‘z; and a slew of Eckhart Tolle new agers.  Oprah seems to be a UM librarian — generally anything she has given her stamp of approval to makes it to our shelves.  Then it gets a bit bizarre.  Danielle Steel and Tom Clancy are popular in our libraries, as is Dan Brown.  It irks me no end to see The DaVinci Code shelved under “Church History,”: as it so often is.  Angels and Demons, on the other hand, rarely leaves “Christian Fiction.”  We are drowning in Chicken Soup — of 210 different varieties.  The is more soup for more souls than you can shake a stick at — if you’re into that kind of thing.  In one library that had copies of The Secret, DaVinci Code, Celestine Prophecy, Your Best Life Now, The Shack, and The Five People You Meet in Heaven prominently displayed, I raised the “Harry Potter question”:  Why none of the popular J.K. Rowling books in the library?  His answer: “We don’t promote that supernatural mumbo-jumbo.”  (In another church the answer was: “We had them, but people took them home and kept them.”  People even steal library books from the church…)

Where do we get the books?

The vast majority of church libraries are “fed” by donations from members.  In the past ten years, I have only found two churches that budget money to build the church library.  Most of the books are second hand — coming from active members or the pastor.  Very few churches “vet” the books that come in — any theology, any subject, any author — whatever is dropped off is shelved with very few exceptions.  I take a simple Warren-Wallis tally — how many Rick Warren books vs. how many Jim Wallis books (conservative-liberal, both evangelical) do I find.  To date, Warren 1,945/Wallis 354.  Many of the books — especially those boasting multiple copies — are given to the church not because people liked them so much they want to share them, but because they didn’t care for them so much.  People tend to keep what they consider “good” books.  In the estimation of many pastors, this is why they are flooded with Purpose Driven Life, the “Left Behind” series, and The Shack.  “People read these because they were popular, don’t like them very much, so they bring them here.  It means that our library gets stocked with a lot of second-rate books — mostly that don’t align well with our theology or beliefs,” one pastor told me.  She continued, shaking her head, “You could hold all the really good books in this library in one hand.”

Apart from a few exceptions, not many people use church libraries anymore.  In most libraries I visit, there is as much dust as there are books.  Many of the titles I pull of the shelves to look at haven’t been touched in ages, and where libraries use check-out cards, the majority are pristine.  Where libraries are used regularly, it tends to be by a faithful handful from the congregation.  “Seven women,” reports one pastor.  Another, “our Sarah Circle (of the United Methodist Women) meets there and they swap books pretty regularly.”  A third, “oh, we have about a dozen old-timers who make use of it.”  One young pastor led me to a door marked “Catacombs.”  “This is where old Christian books come to die and be buried.  When I first came here, people talked about the ‘libury,” and I thought it was just dialectic inflection — now I realize they meant the room where we bury books,” he quipped.

“People just aren’t readers anymore.  This room is just a reminder of a bygone day,” said one pastor.  About 20% of UM churches have no library — and that rate rises to over 50% of churches built in the past twenty years.  “Nobody uses the library, and with good reason.  Look at what’s here.  Commentaries from the 1950s, books from the sixties, old magazines thirty years out of date, hymnals, journals, Bibles with the covers coming off, kids books so filthy I wouldn’t want any kind of mine touching them… on a list of the top 100 priorities in our church, this is about 105.”  Another pastor shared, “Everyone here thinks we should have a library, but absolutely no one is willing to do anything to make it appealing.  It is the room everyone takes for granted and ignores.  I will bet you no one actually knows what books are here.”

What if libraries were viewed as a source of witness?  What could they look like if we crafted them to hold the resources that reflect our theological task, our various faith traditions, our Social Principles, and our mission?  What if we designed them to be learning centers where people could pick up any volume assured that it would help them better understand what it means to live as a Christian disciple in the 21st century?  What if we used the library resources as teaching and formation tools?  What if we applied the same level of intentionality to our libraries as we do our Sunday school or worship planning?  How could we improve our witness and our message were we to help people learn to use our libraries?  Could we cultivate a love for learning and reading in the church lost in the larger culture?

Maybe it is irrelevant and unimportant.  I don’t believe this, but I do acknowledge that I am in the minority.  People in our culture really aren’t readers, and many who are would much rather hunker down with the latest Dan Brown novel than a Bible commentary or a book on Christian discipleship.  Maybe it is naive to think we could resurrect our print reliquaries so that they live and breathe and give life to others.  But to me it seems a great opportunity terrible wasted.