Forgive Me My Shellfish Ways

For years I have been afraid to admit something.  There is a sin in my life so dark and so reprehensible that I barely can admit it to myself.  It is a nagging sin, and one that I know I should be ashamed of, but I am not.  I know what the Bible says.  I know it is “detestable.”  I understand it says it is an “abomination.”  For people who love and believe the Bible, it is an 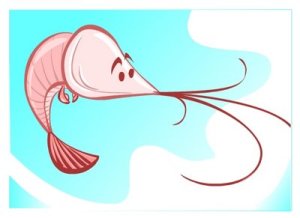 unforgivable and heinous sin.  I eat clams… and I like them.  I also love shrimp and lobster.  I have eaten them many times — knowing all the while that I am forbidden by my faith to do so — and I plan to do so again.  I am truly afraid to confess this, knowing that the only recourse for Bible-believing Christians is to “cut me off from my kin.”  Some well-meaning people have tried to tell me that Acts changed all that — that unclean foods were made “okay” — but it only applies to four-footed animals, reptiles, and birds… I know that.  What’s worse, I have done this sinning publically — at Howard Johnson’s, Red Lobster, Olive Garden — just about everywhere actually.

What would happen to me if my church were to find out that I sin with no actual desire to change my habits?    It breaks my heart every time someone points out to me that the Bible calls what I do an abomination and detestable.  I feel so guilty.  My only concession is that The United Methodist Church has not taken an “official” position on un-finny seafood.  If it were in the Book of Discipline, it would REALLY be bad.

I do wonder what others must think of me when I crack open a crab’s leg or eat a shrimp cocktail.  I would do my seafood eating at home, but my wife — being a good Christian — doesn’t like seafood of any kind (including the Biblically approved kinds) — so I can only indulge in public.  What a disappointment to God I must be…  Perhaps the time has come to organize a global boycott of Red Lobster, Captain Ds, Long John Silvers, and every other restaurant that sells seafood.  Or pizza, for that matter.  As Christians we really should remember that we are forbidden to eat meat and dairy cooked together.

I have a friend who is blessed of God — granted a shellfish allergy, which is obviously a sign from God of acceptance and favor.  I haven’t quite figured out how my other friend with a peanut allergy fits the picture, but I am sure that it a blessing too.  And wheat allergies that prevent people from taking communion?  That must be a special blessing as well.  People wouldn’t have these allergies for no good, spiritual reason.  God wouldn’t allow people to be born in any way that would be fundamentally sinful.  My shellfish sins are all my own.  I choose to defy biblical truth.  But if that were the only one, perhaps I could bear up under the shame.

I also must admit that I went to a church today where women not only didn’t keep silence, but one preached, one served as liturgist, and one gave personal testimony.  I tried not to listen — I really did — but I am afraid I must confess that I did not stomp out in righteous indignation.  All I can do is hope that God will forgive me.  But really, asking such forgiveness is disingenuous.  I know I will listen to women preachers in the future.  I shouldn’t really pray for forgiveness for something I know I will do again.

What would really be great?  To have a faith based on a Savior and not a book.  Wouldn’t it be cool if we could find a religion based in grace and goodness rather than rules and judgement?  I would like a faith built around doing good, not worrying about who is doing “bad.”  But I know that what I eat for dinner is much more important than people dying of curable disease, hunger and malnutrition.  I am so thankful that I am part of a church that expends millions of dollars to hold annual and general conferences to argue over personal behaviors and beliefs instead of making disciples to transform the world.  Otherwise how would I know who to love and who to condemn?  I just hope and pray that no one raises the biblical issue of shellfish, because I would be in big trouble.