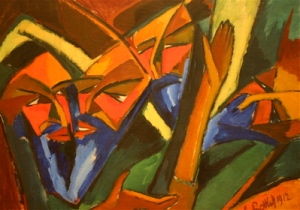 There are two deadly types of leaders in today’s congregations: ascribes — those who ascribe negative intentions to other people’s actions — and pharetics — legalistic types who go out of their way to misconstrue and manipulate information to make others look bad.  Two quick illustrations:

A young pastor left the ministry because, in her own words, everyone was out to get her.  Those who questioned her were undermining her authority and disrespecting her.  Those who disagreed with her were rude and ignorant and had it in for her.  When people wouldn’t do what she wanted, she felt betrayed and unappreciated.  When her SPRC suggested she take a sabbatical for some renewal and reflection, she blew up because they were trying to get rid of her.   She said people were “looking for things in my sermons to attack me for.”  She assumed that when she wasn’t invited to a meeting that it was so members could talk about her.  Over time, her paranoia led her to begin every encounter with defensiveness and aggression.  She was moved from one appointment to another — hoping that she might experience different results in a different setting.  After similar experiences in two different locations, the young pastor’s only reflection was, “the church is full of messed up people!”  A classic ascribe.

A church council chair disagreed with the pastor on the use of some memorial funds.  In exasperation, he said to the pastor, “You’re an idiot!”  He then proceeded to use his time and energy to undermine the pastor’s credibility, questioning his credentials and education, and planting the idea that the pastor wasn’t very bright in the minds of parishioners and other congregational leaders.  Any time the pastor made an error or stumbled over a word or phrase, the council chair would point it out and make a big deal of it.  The man delighted in jumping on any and every opportunity to make the pastor look bad.  He would pull out the Bible, the Discipline, Robert’s Rules of Order, and other “authorities” to “prove” the pastor didn’t know what he was doing.  He launched a one-man-crusade to undermine the effectiveness of the pastor — all backed up by a self-righteous, legalistic, dogmatic adherence to “doing things right.”  Said the pastor, “I found myself constantly editing and second-guessing myself, sneaking around to talk to people to try to avoid confrontation, and cowering every time the phone rang.  It got so bad that I really couldn’t do my job!”  The victim of a Pharetic — a Pharisee using the “truth” to tell lies and undermine right belief and understanding.

Now, I know these are very rare, extreme exceptions and that they don’t exist in most of our churches.  Oh, no, wait, that’s wrong.  They exist in just about every Christian congregation on earth.  That’s a problem.  How in the world did we get saddled with ascribes and pharetics in a culture of Christian community characterized by grace, humility, love, kindness, forbearance, tolerance, acceptance, peace, mercy, and compassion?  Oh, right, those are God’s qualities, not ours.  We’re the fallen ones.  We’re “only human.”  It is unreasonable to expect mere humans to act civilly or kindly or graciously.  That is way too much to expect…

Except it is exactly why the church exists — at least, in part.  If church and the Christian faith has little or no impact on behavior, what good is it?  If “Christian” is nothing more than a label or temporary tattoo, then it is essentially meaningless.  Christianity is not simply about what a person believes.  True Christianity must have an outward and visible expression of its inward and spiritual reality.  What is wrong with us that we cannot create safe, healthy environments where people learn to treat one another better than the rest of the world?  We’ll send mosquito nets half-way around the world with the same hand that stabs the person next to us in the pew in the back.  We’ll weep over the starving child in Africa while vilifying the idiots who left the church kitchen a mess.  We often allow people to say and do the most hateful things “in Christian love.”  What’s up with that?

Who do WE want to be?  What kind of people do we really hope we are becoming?  How do we address behaviors in our churches?  What proactive steps are we taking to create the kinds of civil, kind, just, and respectful communities of faith that truly mirror the realm of God?  In what small ways are we working to create heaven on earth in our congregations?  How seriously are we answering the questions what does it mean to “do no harm,” “to do all the good we can,” ” and to “attend to the ordinances of God?”  Were we spending more real time working to do no harm and to do good, we might actually experience this transformation of the world we hear so much about.  Start at home — get our own houses in order.  If we can’t be trusted with a little, what makes us think we will be trusted with more?  All our efforts to get new people to join us — why?  So we can alienate and mistreat them too?  Come on.  If we were more intentional making our congregations centers of grace and peace, it wouldn’t be nearly the struggle it is to get newcomers.  Our dysfunction isn’t likely to be appealing to much of anyone.

I know I sound like a broken record, but there really is only one answer to bad behavior — cut it out!  If you’re doing it, stop it.  If you see it, name it and challenge it.  If you are affected by it, confront it.  If you don’t like it, make sure it goes away.  Get consensus on your side — whatever a group decides has more clout than the decisions of scattered individuals.  DECIDE to be a better people, a better church.  Decide to be agents of light rather than darkness.  Decide to create the kind of community anyone would feel good about joining.  It doesn’t matter what we believe if our actions only work to belie our words.