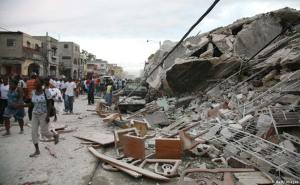 My heart is breaking.  I haven’t been back to Haiti in more than 20 years, but a big piece of my heart is there.  The trips I made to Haiti were life-shaping and values-reshaping.  I learned more about being a member of a global community working in Haiti than I have in any other way.  I also experienced a pure and radical joy in worship in Haiti that I do not find anywhere in the United States.  And the people I met.  Good men and women living hand to mouth in some of the most unbelievably challenging circumstances, with few complaints.  And the children.  Beautiful, wonderful, normal, vibrant children — though often malnourished, ill, broken, or deformed.  Haiti symbolizes for me the crux of the human spirit — doing what you can with what you have to make a life… and not just a tolerable life, but a life filled with some measure of purpose and joy.  The images of the earthquake devastation tear me apart.

Haiti is one of the poorest places on earth.  There are few tradable resources.  The country is essentially deforested.  The cities are overpopulated.  Hundreds of thousands of people live in shanty-style tar paper and tin shacks.  Whole families share 400 square-feet of space squashed in with thousands of other families.  Clean water is just short of myth.  You can chew the air in most populous centers.  In the country, unemployment is the rule rather than the exception, and most families scratch out a subsistence living from what they can coerce from the ground, pull off the trees, or coax from the sea.  When I was in Haiti the first time, we had to walk a mile-and-a-half to pull muddy water up out of a hole to bathe.

My trips were during the Papa Doc Duvalier reign of terror and oppression, but things have not improved markedly in the year’s since.  The U.S. military is present to “help out,” but Haiti’s problems are much deeper than a peacekeeping force can manage.  The divisions between haves and have-nots is unbelievable.  And the contrast makes the strength and nobility of the people we met all the more remarkable.

What I remember most about Haiti —

I could go on and on.  I can never forget Haiti, nor do I want to.  All the current destruction makes me want to go back.  Not that I would be an asset — I have the construction skills of a beached whale, first aid knowledge of a piece of chalk, and my experiences in disaster recovery generally consist of knowledgeable people saying to me, “Excuse me,” and “could you please move over there,” and “I think they need help counting supplies.”  I hate feeling helpless, and I am just so sad.  So I pray.

Two closing observations: first, on the importance of connection.  There are natural disasters in every country on earth, yet this one hits me harder.  Why?  Because I have been there.  Because I have a relationship.  Because Haiti is not an abstraction to me — it’s real.  This is a classic illustration of why hands-on ministry is so vitally important.  I can talk about a place and read about a place and hear about a place, and find it “interesting.”  But to spend time in a place and get to know its people and what it’s really like and to fall in love with it and really care about it?  Totally different story.  All the insipid money issues we struggle with in the church?  Gone in a flash if we got everyone up off their butts — excuse me, pews — and connected to something.  When you connect you care, when you care you invest, when you invest you commit — once committed, you make a difference.

Second observation: I absolutely despise Pat Robertson and all the other hateful, narrow-minded, unChristian, despicable, vile, unkind, arrogant, self-righteous, evil, toxic, stupid, Godless, judgmental idiots who are blaming this earthquake on the victims by calling them sinners and saying that this is payback from God for dealing with the devil.  Robertson claims to know that the “Haitians” met and dealt with a physical personification of Satan, and Tuesday’s earthquake is the result.  Is this man insane??  Is it any wonder that a growing number of people in our world look at such a pathetic, evil little beast like Robertson and say, “if that’s Christianity, I want no part of it?”  The people I met in Haiti — Christian and non-Christian alike — were some of the most wonderful people I’ve known.  The prayer life of Haitian Christians would put most Americans to shame.  The three- to four– hour worship services were joy- and spirit-filled.  The fundamental spirit of generosity and community was humbling.  How dare Robertson or any other pampered, pious American sit in judgment on them?  Lord, save us from ourselves.