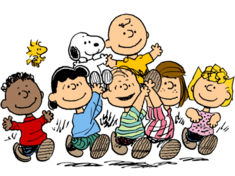 There is this great old Peanuts cartoon.  Lucy is explaining to little brother Linus how the world works.  She takes him to a tree in the yard and shows him the falling leaves.  She explains that this is a normal occurence, one of those wondrous cycles of nature.  She says that there is an important lesson here, and asks if Linus know what it is.  He replies, “Don’t be a leaf… be a tree!”  What an amazing observation, and one that we could benefit from in the church.  The author of Ephesians writes almost 2,000 years ago, “We must no longer be children, tossed to and fro and blown about by every wind of doctrine, by people’s trickery, by their craftiness in deceitful scheming.” (4:14, NRSV)  Two millenium later, how are we doing?  Are we grown ups now, solidly joined as one — standing as a tree firmly rooted and grounded — or are we leaves tumbling in the wind?  Are we known for our unity or our division?  Are we bound together by trust and positive regard or separated by winds of doctrine?

And even being a tree is no guarantee.  Outside our condo, a beautiful old pine with deep roots is laying on its side, roots pulled from the ground, due to snow and wind piling up and finally toppling it.  It is difficult to stand firm in the face of relentless assault — something the church of Jesus Christ faces, both from without and within.  Without unity and commitment to something larger than our own hopes, dreams, and needs, there is no “we,” and without that bond, there is little to withstand assault.  In our consumeristic and individualistic society, the church really doesn’t stand much of a chance.  Rugged individualism is a blight on an otherwise healthy tree.  It rots out the root system, leaving the whole tree at risk.  Signs of this rot are a lack of trust, a lack of civility, an inability to disagree with integrity and kindness, a tendency to be distracted by irrelevancies (color of the carpet, flags in the sanctuary, worship times, styles of music, etc.), keeping of secrets, gossip and rumors, public posturing, adoration of bigness, poor communication, and a strong “us/them” mentality (just to identify a few symptoms).

The solutions — though these are more than just “problems” to solve; we need to change a culture — rests in relationships and a return to basics, I believe.  Fourteen years at the general church level gave me opportunity to make a number of observations.  Each of these speaks to our movement from “treeness” to “leafness.”

These are just five simple, basic things.  The list could be a lot longer, but that’s part of our problem — going out of our way to make things harder than they need to be.  (Heaping snow and wind onto the already weakened structure of our church trees…) If we would just give attention to these simple things, I believe we would grow stronger, and in many important ways be able to withstand the winds of doctrine blowing us to and fro.  It is at least worth considering…