Ravings of an Angry Evangelical

Our country is being destroyed by ignorant, narrow-minded, arrogant, self-righteous Christians.  They call themselves evangelicals, but throughout history they have been known by other names: tyrants, despots, hate mongers, fools… 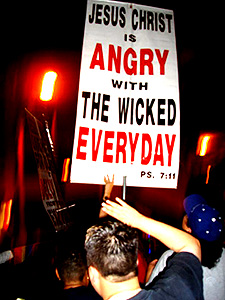 Hold on.  I confess that there are ignorant, narrow-minded, arrogant, self-righteous Christians out there — but there is a fundamental flaw in the following logic that makes me incredibly angry.  And not just angry at the David Carlsson’s, but at all those who try to pidgeon-hole “those” who have ruined the word “evangelical.”  The slim segment of ultra-conservative, neo-fundamentalist Christians who have redefined evangelicalism in the United States are not the whole story (and, by the way, it is not ONLY far-right Christians who are ignorant, narrow-minded, arrogant and self-righteous — there are some pretty obnoxious left-leaners as well.  Just labeling your meanness “progressive” doesn’t help anything, either.)  What also bugs me is that all of this labeling, re-labeling, defending, finger-pointing, and blaming moves us in exactly the WRONG direction.  I am amazed how easy it is to get sucked into the “who is wrong/who is right” negative spiral.  As I read such statements as Carlsson’s, I feel the stress rise within me, and my immediate reaction is to reply in kind.  But anger — and acting out in response — will never move us to a better place.  How can we rise above the maelstrom and find a place of peace and stability.

I am an evangelical.  I am a liberal, progressive, ecumenical, social-activist, pro-healthcare-for-all, mega-church sceptical, what-are-we-doing-sitting-in-the-pews-when-the-world-is-going-to-hell evangelical.  And — I”M PROUD OF IT, and I get tired of a small minority of my “brothers and sisters” making me ashamed to claim it.  But I am also deeply concerned about the penchant we seem to have for labelling people as a way of blaming and dismissing them.  Conservatives, progressives, fundamentalists, liberals, moderates… what possible good do these labels provide?  They could be used descriptively to help define a particular orinetation, but they aren’t used this way.  They are used perjoratively.  The newest not-helpful-label is “wingnuts,” a name ascribed to the Glenn Becks, Rush Limbaughs Keith Olbermanns, etc.  Those who seem to exist to keep people agitated, indignant, misinformed, and angry are a problem, but does it help in any way to give them a derogatory label?  Watching the news is one of the most depressing experiences I can think of, because the commentators don’t present information, but thinly disguised opinion backed by carefully selected images and sound-bites to elicit an emotional response.  The media-manipulation feels toxic to me, and much of it rests on pigeon-holing, categorizing, and stereotyping people to make them fit a profile or caricature.

Most of us learned that name-calling wasn’t acceptable on the elementary school playground, and things haven’t changed — even though we are a bit older.  Most of what passes for “debate” these days is nothing by glorified name-calling.  It’s sad.  There are real issues to discuss and valid opinions on multiple sides of many issues.  In a civil society, not everyone agrees, and in a democracy we allow that we’re not even supposed to.  In a Christian community, the levels of tolerance, forbearance, civility, and common respect should be greater, not less.  Yet, so many Christians resort to embarrassingly unChristian behavior to defend their personal believes and unique brands of faith.  I have been personally appalled at the hateful and petty performances of many “Christians” in response to the health care legislation.  This morning I spoke with a Christian woman angry enough at “Hussein” Obama to wish him bodily harm.  It makes me heartsick.

I know many people who live on a steady diet of Fox News or MSNBC, who are enamored of Limbaugh, Hannity, O’Reilly, Beck, Stewart, and Olbermann and hang on every word they say as gospel truth or golden wisdom.  Having listened to health care debate, then listening to Beck and Limbaugh “translate” it, it is no wonder people have no clue what is really true and what isn’t.  So much of what people are upset about has virtually no basis in fact, but is bound up in a steady flow of misinformation and dogmatic posturing.  What is “true” is lost in a turbulent miasma of incendiary bluster.  (Wasn’t that a poetic sentence…?)  What hope do we have of generating any kind of unity or consensus when we keep everyone riled up by skewed, politicized interpretations and fabrications?  Watching a few minutes of the Daily Show just casts the problem to the other extreme.  Humorous asides that have no bearing in reality get picked up and quoted as “facts” by other people.  A comedy show is somehow misconstrued as a news show.  And the “news” shows — which are talking head op-ed performances at best — confuse punditry and opinion with information.  Yikes.

Then we mix religion into the mess and wonder why the church has a credibility problem?  It is fine for people to hold different opinions, and even to defend them passionately.  What is not all right is for people who profess to follow Jesus Christ to engage in spiteful, hateful, petty, disrespectful, insulting, and injurious behavior.  It isn’t all right for us to resort to the basest and vilest forms of name-calling, gossip, rumor-mongering, and lying, and add insult to injury by pretending we are speaking for God.  Come on.  We need to be better than this.  Christians need to rally and covenant together to “first, do no harm, by avoiding evil of every kind,” then proceed to “do good of all possible sorts, and as far as possible, to all…”  We need to be a witness to the divine love and grace of God.  We need to get our own house in order by learning to treat each other well, then we need to take it to the streets and show the world that there is a better way to live than to constantly tear each other down.  Many Christians agree that this kind of destructive treatment needs to end, but it won’t stop if we don’t stop it.  Let’s start living by the basics: be kind, be courteous, be respectful, be loving, be generous, be patient, be forgiving.  In other words, be just a little more Christ-like.  It could change the world.  But it’s going to take time, and it has to start somewhere.  Perhaps it could start with us.

Categories: Christian witness, Communication in the Church, Core Values, Religion in the U.S.