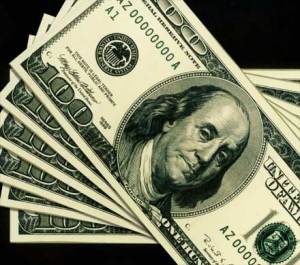 A young man came up to me the other day and led off with the line, “You probably don’t remember me, but…”  Having worked for the national church for almost 15 years, I have met an awful lot of people, and I must confess that I don’t remember too many of them, but this young man went back even further to my days in New Jersey.  He said, “We only attended your church one time when I was like fifteen, but I still remember you.”  I don’t think there is anything a preacher likes hearing more than that he or she said something to a teenager 22 years ago that made a lasting impression.  Most of what we say seems to be forgotten before the majority of people exit the sanctuary…  Anyway, what he remembered was “the $100 challenge.”

I haven’t thought of this in years.  I went to two small churches that had a terrible track record paying their apportionments.  (Apportionments being the “fair share” of missional and denominational support each congregation gives through the annual conference to support the work of the church.)  The combined apportionment for the two churches was no more than $8,000, but generally each congregation only paid in the hundreds.  Leaders in the congregations were fuzzy about what apportionments were and did.  Paying apportionments in full was one of my top priorities, but the skeptical leadership didn’t share my commitment.  I remember the chair of Trustees telling me, “if you can think of some way to raise the money, we’ll gladly pay them.”  I took the dare and came up with the $100 challenge.

I listed out twenty of the missions and causes supported by apportionments in our conference.  I asked people for a few weeks if they would be willing to donate just one dime to each of them to see that these ministries could continue.  Just $2 per week per person could support not just these twenty, but dozens others as well.  I challenged every person — man, woman, and child — to commit to raise and/or give $100 over the year.  I also issued the challenge to the UMW, UMYF, UMM, each of our committees, classes, study groups, etc., thinking if we could just get about half the congregation to commit, we would more than cover our apportionments.  That year, we ended up paying 121% — our best giving ever.

We never had problems paying our apportionments from that day forward.  It simply became part of what we did.  Most people waste more than $2 per week, so for the vast majority of people it was no hardship at all.  The young man who approached me told me that he never forgot the basic message: it doesn’t take a lot to do good, but it requires that many people are needed to do a little on a regular basis.  In a lump sum, an apportionment might seem like a large amount, but when it is broken down to a manageable level, virtually no church can’t rise to the challenge.  When we first issued the challenge, most people paid their money right away, or over a very short period of time.  UMW held a fund-raiser and paid $1,000 to help cover the challenge for those in our congregation struggling financially.  The UMYF had a candy sale and gave $350.  Two Sunday school classes dedicated their weekly offering to apportionments once they understood the local missions they helped support.  We even had nominally active members send us checks to cover “their share.”

What comes to mind with this challenge was that it was simple, fairly easy for almost everyone, optional — no one was forced to “pay up,” and it was tied into telling the story of what apportionments actually do, instead of approaching them as “church taxes” or “membership fees.”  People liked paying their apportionments.  People felt good about their simple gifts.  People were happy to be doing good.  I wonder how often we inadvertently make apportionments — and giving in general — harder than it needs to be?

People want to do good.  Most people wish they could give more.  It makes great sense to help people feel better about the giving they can actually do, instead of making people feel guilty for what they aren’t doing.  In 1988, the per member apportionment was approximately $69.  Today it is in the $85-90 range most places.  The $100 challenge can still work.  It still covers the membership.  And almost everyone can find a way to free up a couple bucks a week for good causes.  I’m talking movement here.  I would love to see churches across the country struggling to meet apportionments to issue the $100 challenge.  See what happens.  The worst outcome is nothing changes.  The best case?  We fund our church at a 100% level and take pressure off the system so that we can worry less about money and get our focus back on mission.  Help people do a little, and we might just change the world.

Tagged as: Church Leadership, Money and the Church, The United Methodist Church