A Call to Auction 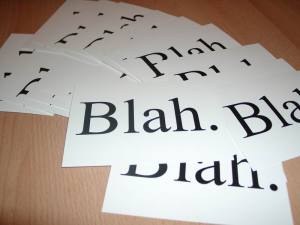 Let’s just put it out there to the highest bidder.  We obviously don’t know what to do with it.  The new Call to Action report came out saying what we already know and offering the same old tired suggestions for “widespread reform.”  What a short memory we have.  We studied our church in the 80s and recommended the same thing (remember Vital Congregations/Faithful Disciples?).  We studied in the 90s and recommended the same thing.  I studied in the 00s (Vital Signs) and saw the same things (though made some different recommendations).  Now we’re in the 10s and we’re devoting tons of time and money to finding out, wait for it, THE SAME THINGS.

Part of what is so sad about all this is that the insidious church growth, professionalism, service industry mentality that got us into this mess in the first place is at the heart of the solutions we seek for the future.  The thinking is that if we do the wrong things better, it will all work out fine.  Good luck with that. Making more of what we don’t do well is no solution.  Getting more people to connect with a dysfunctional system won’t fix the system, it will simply mess up the people.

I have the same problem with what I am reading in the Call to Action report that I have with the Rethink Church marketing campaign — they are driven by institutional preservation, not missional transformation.  Reducing the number of agencies, realigning structures, refocusing message — these are symptoms, not root causes.  This isn’t a political campaign or the roll-out of a revamped “product” or the “positioning of a brand.”  Until we grow up and adopt a more systemic approach we will merely get a whole lot more of what we’ve already got.

Our short term future is going to be a continued loss of members.  The main decision we have to make is this: do we lose those with a heart for Jesus Christ and a desire to become Christian disciples by pandering to the less engaged and try to attract more warm bodies (hopefully will warm wallets), or do we raise the bar, get serious about transformative discipleship at the risk of losing the Sunday pew-sitters and the Christian consumers and the “what-have-you-done-for-me-lately, what-will-you-do-for-me-next” pay-as-you-go, spiritual but not religious crowd?

Harsh?  You betcha.  I am tired of being sold-out.  We have a church of one million highly motivated, giving, loving, serving, sacrificing Christian men and women propping up a dinosaur of an additional 6.5 million people along for the ride.  We do not have the courage to challenge people with a “are you serious about this or not” message, because the 6.5 million hold assets we want and need and we cannot risk losing more money.  Well, discipleship isn’t that simple.  We cannot have our cake and eat it, too.  Discipleship has costs.  If we don’t want to pay them, that’s fine, but let’s stop looking for “disciple-lite” alternatives. Watering down the Christian faith is not the answer.

Don’t get me wrong.  We need A Call to Action.  We need to Rethink Church.  But we also need Common Sense and Historic Perspective.  We need to Wake Up.  We need to stop hiring outsiders to tell us who we ought to be and what we ought to be doing.  We need to rally the community of believers called United Methodist and answer some simple questions: who are we — really?  why are we here – why do we exist as a church?  what is our witness — what are we trying to do as the body of Christ?  what is our impact — what difference are we making in the world and in the kingdom of God?  Out of this discussion we can begin to discern what our witness needs to be, what impact we want to make, and what the future of The United Methodist Church can be.

I say this with deep respect for the people I know who are involved in all the processes of research and discernment in the church.  I think many of the people involved have nothing but the best interest of the church at heart.  But I think we are missing something.  I hear the public statements, then I have the hallway conversations, and we’re not all on the same page.  The “been here before, done this before, nothing changed” attitude is pervasive.  I pray that from all this chaos a new order emerges.  I think there are enough people who are going to fight and fight hard for the reformation and renewal of The United Methodist Church.  I’m one of them, and I am in regular contact with hundreds of others who share my concerns (and hundreds of others who think I am full of holy hooey…).  I’m concerned by the latest reports, as I have been for the better part of the past three decades, when essentially the exact same report was released each and every time.  May we find the wisdom to break this cycle.