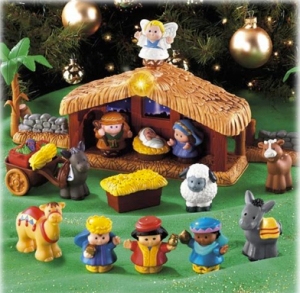 I need to confess.  I missed four opportunities to witness to my Christian faith this week, where I had clear occasions to challenge, confront or correct opinions about Advent and Christmas.  I didn’t say anything then, but I’m going to say something now.

#1 Advent is NOT Christmas (or Epiphany) — last week I attended a church (thankfully NOT United Methodist, though I know full well it easily could have been) to celebrate the first Sunday of Advent by singing songs about the birth of Jesus and the visit of the Wise Men.  During the lighting of the Advent wreath candle, the litany claimed that we light the candle of hope ” for the second coming of the living Christ.”  We were reminded that Advent is when we celebrate “the birth of the Messiah.”  This is from a church that prides itself on reaching the “unchurched.”  What a confused mish-mash?!  The relentless misinformation in this service might be viewed as insignificant by some, but I found it troubling… but not as troubling as the call I received from a confused parishioner who wanted to double-check what her pastor said in a children’s sermon.

#3 How Can We Keep Christmas from Being Too Religious? — I attended the Madison (Wisconsin) Symphony Orchestra Christmas concert this past Friday evening (my wife, Barbara was in the chorus, and she was fantastic) and sat next to some very nice couples.  As the concert came to an end, an elderly woman close to me turned to her husband and said, “I absolutely love this concert every year, but I don’t understand why they have to sing those religious songs!”

#4 Stupid Christians Ruin Everything! — At my favorite coffee shop I overheard some of the regulars talking about the holiday season.  Here is the gist of what two of the older gentlemen in the group were saying.  “Christmas would be fine if the Christians would just butt out.  Forcing their beliefs on everyone else makes Christmas unpleasant and irritating.  No one really believes in all that stuff anymore anyway, and Christmas is really about music and food and presents and decorations, and imposing a religious theme on it ruins everything.”  About the only sentiment these two men didn’t share was some form of: “if they want a holiday so bad, why don’t they start one of their own!”

I hesitate to go on — I would hate to be lumped in with the “war on Christmas” chuckleheads — but I am concerned.  The Christian church is on the brink of losing Christmas!  Not because it is being taken from us, but because we are happily, ignorantly, and obliviously frittering it away.  We don’t know our own story.  We don’t know how to tell it.  We can’t defend it.  And we can’t open it up to un- or other-believers without it being a competition or confrontation.  But, let’s be clear, Christmas is ours.  We started it.  Oh, sure, we impinged on harmless Pagans to put it in the bleak midwinter, but that was a long time ago.  Yes, we have allowed a fat toyman to divert attention from Jesus; yes, we have sold out our commitment to justice, equality, grace, peace, hope and joy to cookies, candy, talking reindeer and snowmen, lavish decorated trees and regifting, but hey, can’t we take a joke?  There is no winnable argument that Christmas is something less than a true religious celebration, but the religious celebration is still a part of it, and Christians have nothing to apologize for.  I am not one to trade-off “Merry Christmas” for “Happy Holidays.”  I don’t offer the greeting as an insult, and I cannot control those who choose to hear it that way.  But I am a Christian, and I am ecstatic that the Son of God came to earth, and I will continue to recognize that tenet of my faith whenever I can.  And, by the way, I don’t think the animals talked when Jesus was born (Matthew and Luke neither one even mention animals) and I wish we in the church could think of something more important in this story to tell our kids.

Consider this a call to “occupy Christmas.”  Let’s take it back, make it ours, and offer to share it with anyone and everyone who cares.