What Kind of Church…?

Today has been a day for introspection — thinking about the future by reflecting on the past.  Thinking particularly about the three churches of my childhood and what they taught me about what it means — and doesn’t mean — to be church.  And, at least in my case, three stories of churches stuck in their own day with no thought of or regard for the future.  They create for me a parable, a cautionary tale, of what can happen when your vision is too small, your foresight too narrow, and your ambitions too selfish.

When I was a wee lad, I was shuttled between three very different churches.  My mother went to a large, old, declining Presbyterian church on a college campus (that had only about five college students in attendance), while her mother (my grandmother) attended an ultra-conservative Southern Baptist church.  My grandparents on my father’s side were members of a small, suburban, conservative Presbyterian church.  (I became United Methodist out of self-defense…)  My church life was split between my mom’s Presbyterian church and my grandmother’s Baptist church, with an occasional visit to my other grandparent’s church thrown in two or three times a year.  As I reflect on these churches — and on my family members as church-goers — I see three distinct congregational worldviews that have not changed significantly in almost fifty years.  New generations have come to occupy these churches and others like them, but the basic orientation to the world stays the same.

Big, Old, Established Church — my mother’s church was a prisoner to its own proud history.  Once great, growing, and influential, it failed to change with the times and most of its members migrated to newer, fresher, and more accomodating congregations.  Mom’s church lived (and nearly died) by the complementary creeds: “We’ve never done it that way before,” and “We’ve always done it that way”  Change was not merely resisted, it was viewed as a threat to the very nature and identity of thos congregation.  The congregation was run by a small cadre of greyheads (and/or baldheads) who employed the iron hand, but never bothered with the velvet glove.  Nothing, and I mean NOTHING happened in the church without this group’s approval and support.  They lamented the fact that no young families were joining the congregation, but woe unto anyone under 50 who presumed to have an idea or suggest a change.  What was good enough for John Calvin was good enough for them.

And yet, they were a community of good people.  They loved the church, they loved God, they loved the Bible, and they loved each other — but passively.  What was never apparent was their love for the mission of the church, an appreciation of the will and purposes of God, passion for the gospel and the great commission, and a love for people outside of the circle of existing members.  Like a fossil frozen in amber, this proud congregation slid into deep decline and stuck there — visible for all to see, but basically dead.  There was no vision to be something other than what they already were.  No ambition to improve and increase their service to God.  No mission beyond survival.  And as they lost relevancy, they lost credibility.  I heard the church was doing better in more recent days, but when I visited a few years ago, I found a sanctuary designed for 600 hosting a mere 50 — mostly older, mostly content to be served, mostly passive recipients of a modest message with no challenge or commission. 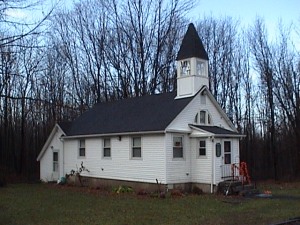 Tight, Small, Exclusive Church — at the other end of the energy spectrum was my grandmother’s Baptist fellowship.  Hers was a church of constant activity — like a beehive for Christians.  There wasn’t a day of the week that something wasn’t going on in the church building.  Wednesday and Sunday services, Monday prayer fellowship, Tuesday and Friday suppers, Saturday morning breakfasts and workdays.  The same small group of men and women spent their lives together in community, but it always felt a little inbred and toxic.  My grandmother’s church adopted a “church against the world” mentality — the world is an evil and violent place, where sin corrupts everything and nothing good and decent can be found outside the church.  The threat of eternal damnation saturated every sermon, Bible study, and newsletter.  The Satanic influences at work in government, business, television, music, literature, and public education were constant topics of discussion.  As a child, I came away with the idea that Satan was much stronger and more powerful than God — God’s people gathered together to cower behind church walls while the devil had his way with the world.  It was all very confusing.  The Presbyterians weren’t the least bit concerned about Lucifer.  In fact, they didn’t seem to be concerned about much of anything.  But my grandmother’s Baptists were concerned about EVERYTHING.

I also learned some weird church practices from my grandmother.  She had her own seat in church, and no one else was supposed to sit in it.  If we came in and someone was sitting in her seat, we would turn around and leave.  She would then be in a bad mood the rest of the day.  She was intensely loyal to her church and her pastor, though she disagreed with everything he said.  Following worship, my grandmother would launch into a half-hour rant on all the ways that the pastor was nuts, crazy, wrong, ignorant, small-minded, too liberal, too conservative, too brainy, too stupid — I cannot recall my grandmother ever liking a sermon.  But heaven help the poor fool who suggested she should change churches!  The only friends my grandmother had were her church friends, but she gleefully gossiped about each and every one.  Gossip, it seems, was not a sin in the Southern Baptist church of my grandmother.  In fact, it apparently was one of their core spiritual disciplines, since it was more prevalent and faithfully practiced than prayer.

The other thing I remember clearly about my grandmother’s church is that it was constantly doing something “for poor starving babies in Africa.”  Blankets, booties, caps, mittens and sweaters (it took me a few years to question the mittens for African children, but it was well-intended), were produced in abundance, and soap, pencils, paper, coloring books and crayons were gathered year-round in big barrels at the back of the sanctuary.  The church supported a retired missionary from Africa — Miss Livi — who came to church once every few months and showed us the same two-hour slide show every time, from her work in Africa in the 1940s.  The church didn’t send money or missionaries to Africa anymore — they just continued to support Miss Livi.  I once asked why we sent clothes and drawing supplies to children who were starving and the pastor explained to me that food was perishable and wasn’t practical.  It taught me that missions wasn’t about meeting people’s real needs, but merely doing nice things that were within our means.

This small church is gone today — the faithful remnant finally died out shortly after they could no longer afford a preacher.  I remember talking to one of my grandmother’s friends after the church closed, and she said, “I am furious at God that He would do this to us.  We didn’t do anything to deserve this punishment.”  No one in this congregation took responsibility for what was happening.  Good times were a blessing from God; bad times a curse.  But inevitably, it was all about “them,” and they never captured a vision that took them outside of themselves.

Small, Scared, and Sedentary — my grandparents church is the most frustrating of the three.  This was a church that had everything, but found unlimited ways to squander what it possessed.  It was a church so wrapped in a shroud of fear that it extinguished any step of faith anyone tried to make.  The church built a new building on a beautiful piece of

property someone bequeathed them in one of the fastest growing part of town.  The trustees decided to build a smaller building with a smaller sanctuary than the one they were leaving, all in the name of good stewardship.  Instead of developing an adequate paved parking lot, they decided to have a small gravel lot, and to sell off the remaining property for commercial development.  They left themselves a landlocked postage stamp of land, with a tiny building and inadequate parking.  Because they only had a few children in the existing location, they saw no reason to build a Sunday school, so they dedicated only two small rooms for children — one for children 7 and younger, one for children and youth over 7.  To further save money, they called a retired pastor to preach on Sundays and do visitation.  Since they wouldn’t have a full time pastor, they decided not to have an office or pastor’s study in the church.  This church offered no adult education, and was literally only “open” on Sundays.  My grandparents were elders, members of the sessions committee, and trustees of the church.  They were instrumental in making these decisions.  They crippled the potential of this church to be in ministry because they could not abide the thought of any debt.  In 1969, this small, struggling church with 70 members and a part time pastor had over $2 million dollars squirreled away in the bank.  My grandfather was so proud of his leadership that guaranteed the church would be provided for and safe for decades to come — a monument to the faithful stewardship of a small group of Presbyterian elders who loved their church.

As an adult, I understand that much of my passion for what the church can be comes from my own background where I saw the church failing to live up to its mission, in freefall with lack of vision, and dedicated to preservation and survival rather than transformation and service.  The question none of my childhood churches ever asked was “What kind of church is God calling us to be?”  My boyhood congregations lacked any apparent desire to be more than they already were.  The church was insulated, isolated, provincial fellowship with no capacity for change.  All the efforts and energies were aligned toward holding onto the familiar, the comfortable, and the secure.  How does the church of Jesus the Christ, the incarnation of the Christ’s body for the world, come to such a state of complacency and compromise?

It is one more reminder to the importance of spiritual focus, discernment, and vision in the church.  Bible study was not a high priority in any of my childhood churches, and prayer was somewhat perfunctory.  I cannot remember any talk of vision or outreach or seeking God’s will.  In the case of my grandmother’s Southern Baptist church, the pastor served as arbiter and interpreter of God’s will.  In the Presbyterian church, God’s will was predetermined and nothing we could do would change it.  I grew up in settings where people simply settled for what they had, and did everything in their power not to change.