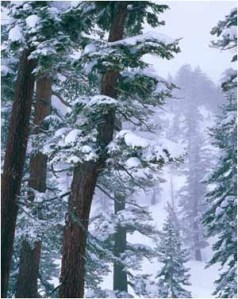 There is a special kind of snow — it falls not in flakes, but in hunks.  It drifts down in surreal, tumbling patterns and sticks to everything.  It muffles all sound.  It transforms the world into a snowglobe.  There is nothing I love more than walking in such snow, and it always brings to mind a personal epiphany when I was twenty years old.  1978 was a crisis year for me.  In the fall I had a heart attack that forced me to drop out of college, give up a job I loved, and to see myself in a whole new light.  At twenty, a young man should be hitting his peak.  In the early fall, I had everything bright and shiny before me.  Good health (I thought), good grades, good job, good relationship with a great woman, and no clouds on the horizon.  I was active in my church, having “come back” to the faith a year before — I was working with youth, teaching Sunday school, singing in a choir, and active in Bible study.  My life felt balanced and sound for the first time in years.  Then, in October, I collapsed after my English class and woke up in the hospital.  A congenital weakness caused my heart to seize, and for a couple weeks things were touch and go.  I got back on my feet in November, but with strict limitations.  I took incompletes in all my classes, had to leave my job at a campus bookstore, and my girlfriend dumped me because she couldn’t take the stress of my ill-health.  I had to give my youth group and Sunday school activities over to friends.  I was feeling about as low as I could go.

Depression is a terrible thing.  It is both insidious and relentless.  I remember sitting alone in my apartment too lazy to even get up and turn on a light.  I sat brooding, dozing, despairing.  I didn’t decorate for Christmas, didn’t listen to any holiday music, didn’t visit friends (and didn’t answer the phone or the door when friends tried to visit me), didn’t do any shopping.  All I did was feel sorry for myself and to give in to the fear that my heart was going to betray me and give out all together.  I was a mess.

About a mile from my apartment was a small, gated botanical garden — part of Ball State University’s horticultural department — called Christy Woods.  I have no idea who “Christy” was, but the few enclosed acres were a favorite spot — a place I often went in spring and summer to walk and to read.  For some reason I never spent much time there in the fall or winter, but one day the week before Christmas in 1978 I got the urge to return to Christy Woods.  I left my apartment without hat or gloves or jacket, and trudged off.  While walking, it began to snow, softly and gently at first, more vigorously and seriously as time went by.  Already feeling sorry for myself, I decided to forge ahead — thinking maybe I would freeze to death, putting myself out of everyone’s misery.  I got to the gate at Christy Woods, and as I passed through it was like leaving one reality for another.  The wind died and the blowing, stinging snow drifted gently in fluffy blobs.  Everything was covered in soft, puffy mounds of undisturbed snow.  I strolled along a pathway, the sound of my own footsteps the only noise I could hear.  I rounded a curve, and before me stood two deer, a buck and a doe.  They watched me with large, liquid eyes, but neither moved to run away.  I walked past them, winded by their subtle, simple beauty.  I walked deeper into the woods and it got dark, but the luster of the snow and the bright glow of the clouds allowed me to see clearly.

I thought about the deer.  I marvelled at the snow.  I kept on walking, and I began to cry.  It felt as though my heart was breaking.  All my defenses came down and I gave into my fear and anger and sadness.  I sobbed and walked, walked and sobbed, and as I went I began to feel lighter.  Something shifted.  I began to feel hope.  I began to feel like maybe what was happening to me wasn’t the end of the world.  I began to think I could start over.  I began to pray, something I had not been able to do for weeks.  I dropped to my knees in the snow, and I haven’t the foggiest notion what I said or thought.  I just knelt there for a time, and when I stood up, I was okay.  Not just better, but okay.  I resolved to get myself back in decent health and get back in school.  I determined to get another job as soon as possible.  I figured the girlfriend thing would take care of itself in time.  I knew I wanted to get back to church and “my kids” as soon as possible.  And I wanted to be with my family and friends for Christmas.

I marched back to the gate to Christy Woods.  When I got to the sign, I noted that heavy snow hung, obscuring the second half.  Only “Christ” was left uncovered.  I remember thinking at the time that this was overkill, but hey, every artist likes to sign their work.  I went home, turned on a light, and put on Christmas music.  I didn’t know it then but, I have come to understand it since, that walk in Christy Woods changed my life.  Would it have happened anywhere else?  Probably, but it didn’t.  The shock and surprise of meeting the deer on the path opened something in me in a way I cannot explain, and since that chance encounter I have never been the same.  A spiritual experience?  Divine intervention?  I don’t know and I don’t care.  I was lost but now am found; was blinded but now I see.  Grace is amazing, no matter where it comes from, no matter when.  I received new life in a gentle, glorious snowfall.  It’s no wonder I love snow so much.