Before There Was An Ending

Part of what makes the Christmas story so phenomenal is that we know how it all turns out.  We know who Jesus is.  His birth narrative — for us — is nothing more than a remembrance.  It is the story of the genesis of God’s redemptive act.  It is the pivotal point upon which the gate of history swings.  Yet, I always wonder what it was like before the ending was well-known.  There are some truly amazing — incredible, unbelievable, mind-bending — aspects to the birth of Christ that I think have been lost in translation — translation of language, time, culture, worldview, perspective, and belief. 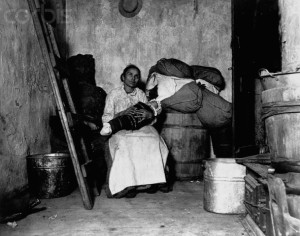 A poor, insignificant, uneducated girl lacking any power or influence in the world receives a divine visitation.  If she is a product of her culture and station in life, she is likely very superstitious, feeling more fear than reverence for things spiritual.  She has a rudimentary understanding of her own body and physiology and is awaiting marriage to a man she may very well not know at all.  And she discovers she is pregnant.  And this is one of the absolute worst fates to befall an unwed girl in her time and place.  In 999 cases out of 1,000, her betrothal to Joseph would be null and void and she would become a social outcast at best, put to death at worst.  And in the unlikely event that Joseph might keep Mary, the inglorious reputation would be theirs for life.  They would hold no respect or power in society.  They would likely renounce name and home and ancestry to begin life new where they were strangers — another guarantee that they would never hold power or influence.  A young couple — not unusual for the woman to be 12 or 13, the man to be anywhere from 18-25 for a first marriage — essentially on the verge of losing everything of worldly value.

Joseph, a man of the trades class, uneducated but skilled, probably established in a family business.  With a pregnant woman — a woman impregnated by a spiritual force only she, and later Joseph, can testify to — Joseph would of necessity leave the family business.  He would still be a carpenter, but only to do those itinerant jobs left over by master craftsmen.  His would be a much harder life, forcing him to travel where there was work.  All this is speculative, but based on a very simple, primitive culture that is fairly well understood.

The whole census concept is debated in scripture, but it could be that Mary and Joseph were essentially homeless and looking for a place to set down roots.  Regardless of actual motivation, an honest appraisal of Mary’s state at the time of the birth is heartbreaking.  No family or friends around, walking great distances while in the advanced stages of her pregnancy, in unfamiliar — and hostile (crimes against poor travellers were constant on the byways of the first century middle East) — territory, with no clean lodgings or medical attention.  I cannot conceive of the terror of two young people, alone in a strange place, facing the birth of a child.  We so often create a warm, sterile, sweet and lovely image in our mind of an idyllic birth, where apparently Jesus simply slides peacefully from Mary and she looks like a white, middle-class, “million bucks” who has been through nothing more than a stressful morning.  I remember what my wife looked like after a moderately simple birth in a modern hospital with drugs and ambient music and she hadn’t been walking dozens of miles through the wilderness a short time before.  Somehow, I think we’re missing something with Mary’s delivery of Jesus.

Relief?  Fear?  Despair?  Certainly not joy — at least not immediately.  Mary holding a newborn infant wrapped in the cleanest rags they could find, Joseph close by (probably not knowing what to do for Mary and the baby anymore than billions of fathers through time…), in the dark, in the smells and sounds of animals.  Even if another “heavenly” appearance occurred, would it give more comfort or panic to a young, uneducated Jewish couple?  Chances are they were not of the wing of Judaism looking expectantly for a Messiah, but a more orthodox and simple sect.  How were they making sense of everything happening to them?  And when shepherds — strange men of the fields that they did not know — showed up, was it immediately a moment of joyful celebration or another moment of abject fear?  Mary witnessed these things and locked them away in her heart — we translate this as a wondrous, happy experience, even using the word “treasure” for her experiences — but I sometimes wonder if it wasn’t as much shock and trauma that inscribed these events on her psyche as it was divine intervention…

And think about it.  A poor, homeless, (essentially bastard) child is born in a rural backwater.  At best, a handful of people are aware the child even exists — even with the angels best efforts.  What changed that first Christmas night.  Yes, okay, everything, but that’s because we know the rest of the story.  For the vast majority of the known world, it wasn’t a special night.  It certainly wasn’t a holiday and it wasn’t a time of rejoicing.  The people went to bed oppressed by a regent power and they woke up oppressed by the same regent power.  They went to bed poor (97% of them, anyway) and they woke up poor.  The Hebrew people went to bed Jewish and they arose the next morning as Jewish as ever.  What has become for us such an amazing event was once a massive, secret non-event.

Forgive my silly ramblings, but I think putting it into a more realistic perspective doesn’t rob the story of its majesty and power.  If anything, it makes it that much more miraculous.  The odds against the event were astronomical, and it changed EVERYTHING.  Cool, huh?  It makes me more committed to sharing the good news with everyone I can.  It is why I am not so worried about all the rules and regulations required to be a “good” Christian, but am more interested in the hope, justice, mercy, kindness, love, peace, and joy that comes to us as a freely given gift from God.  Once I have given away all the love, joy, peace, mercy, acceptance, tolerance, forgiveness, justice, grace, and kindness I can, then I will worry about whether or not people deserve it.  If grace can come to the poor couple from Nazareth in the form of the Christ child, I guess it can pretty much come to anyone.  At least, that’s Christmas to me.