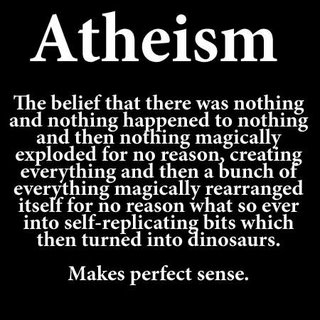 I had a conversation with a friendly atheist recently that leaves me scratching my head.  The reason is that, as I have found so often to be the case, he wouldn’t play by his own rules.  This young man wanted to only address what was “provable” as true, but kept using his own personal and subjective experience as evidence in support of his “proving-a-negative” thesis (there is no God – proven by the absence of proof).  He even, at one point, said that the growing number of educated people who don’t believe in God is evidence that there is no God.  This after denying my assertion that the billions of people who believe in God gives credence to a “something” “out there” that people experience in a meaningful way.  I spoke of the great good that his been done in the name of God throughout the centuries.  He countered that the acts of humans in the name of God does not prove God’s existence, but then he proceeded to number the great atrocities done in the name of God as proof that God doesn’t exist.  I talked about the transformative encounters with the divine in every generation of human existence through recorded time, but he argued that these were mere “hiccups” in our brain chemistry, and besides even more people did not have such experiences, so based on the weight of numbers, the “proof” was against, not for — and anyway, subjective experience should not be allowed.  He told me he had prayed, and nothing had ever happened to him, which “confirmed his suspicions” that there was no God.  Apparently, only his experiments are objective.  We talked about the power of prayer.  He explained that the connection between prayer and any tangible outcome was unprovable, and besides, even if a causal connection could be proven, it would do nothing to indicate that God has anything to do with it.  I brought up the distinction between the physical and the metaphysical — the difference between proving what and how versus why, and he patiently explained that there is no why, only what and how — that why presumes a source and intention, and that is the very thing that cannot be proven.  So I asked him what evidence exists that disproves source and intention, and he scoffed that there is no evidence, therefore it is untrue.  (in his mind, you can prove a negative…).  I asked, “So if I say – if I’m lying, may God strike me dead where I stand! – and I am not struck dead, this proves there is no God?”  “Well, it certainly raises the question,” he replied.

I have read Dawkins.  I have read Hitchens.  I have read Harris.  It always perplexes me the double standards they employ to make their points, tossing out scientific method or journalistic integrity in order to make their points.  They resort to the very kind of “sloppy” thinking they attack.  They twist and misuse “evidence” to make subjective and conditional points.  They state as “truth” that which they feel no responsibility to “prove.”  They won’t engage in any kind of philosophical inquiry — they only want “scientific” debate, defined by their own personal set of rules.  Consistently, the rely on irrational approaches to attack the irrationality of religious belief.

The saddest thing to me is that they make some excellent points.  They go after the “low-hanging fruit” of religious hypocrisy, fanaticism, duplicity, materialism, corrupted values, poor scriptural interpretation and application, and human fallibility and shine the light of reason on our many foibles and failings.  They document the one-thousand-and-one-ways that imperfect humans live out imperfect faith.  Then they make the spurious leap that our inadequacies prove the absence of a divine creator God.  They gleefully pick apart the ignorant creationist views of a lunatic fringe of Christianity — apply it to the entire theological spectrum — and use the flawed arguments of flawed people to show that a “perfect God” would not allow such idiocy (therefore, there is no God…).  They will only engage in a discussion of the grand-old-white-guy-in-the-clouds-with-a-flowing-beard image of God, because this childhood/childish image is so ludicrous that is makes Christians seem credulous and vapid.  They won’t regard the serious academic theologians in their arguments, preferring instead to attack featherweights like Warren and McLaren.  If you launch your attacks against the most simplistic and superficial thinkers, you are guaranteed of winning every time.  But all this “attack” energy results in debate rather than dialogue, and adversity rather than collaboration.  Outside eyes are needed to raise questions about the failings and weaknesses of religious practice, and God knows (I am still assuming God’s existence…) we need improvement.  Faith can always benefit from the rigors of critical thinking.  If it can’t, then it isn’t worth much to begin with.

But I also realize that not everyone feels this way.  Here is an excerpt from a letter I received this week from a friend in Nashville.  I was her advisor at Vanderbilt University about five years ago when she began her Ph.D. work in genetics.

As you know, I taught a young adult Bible study at <my> United Methodist Church since 2002.  I love the class and the discussion we have and the openness to deal with new and sometimes controversial ideas.  I have always felt safe there.  But when I got my Ph.D. and announced that my intention is to do research in genetic re-engineering, the pastor of the church asked me to step down from teaching my class.  He told me I was sending the wrong message and that he and others in the church are not comfortable allowing someone to teach who is knowingly violating the sanctity of life and disrespecting the will of God.

I am what you called a “religious rationalist.” (A person who holds scientific knowledge and spiritual knowledge in two spheres — the physical and metaphysical — balancing an empirical way of knowing with a trans-rational way of knowing.)  I have found no contradiction between what I have learned in science and what I believe about God.  Certainly my way of believing is not 100% compatible with others in my church, but I am still a Christian, and I am a person of faith when I do my work.  Why can’t I be a person of science when I worship and teach?

Why, indeed.  If we are created in the image of God, then the development of our minds and intellects is holy work.  As stewards of our bodies, minds, and spirits, we should be doing all we can to develop and improve all three.  All three are gifts to us from God, and our faith teaches that God expects that we will employ excellent stewardship of all our gifts.  We should care for our physical bodies.  We should sharpen and improve our minds.  And we should deepen our relationship with the divine and open ourselves to the mysteries of
God.  The good, the beautiful, and the true should be attended equally.  Ethics, philosophy, and science are all equally legitimate pursuits.  To preference one at the expense of the others is self-defeating, and ultimately irrational.

Tagged as: anti-intellectualism, science and religion