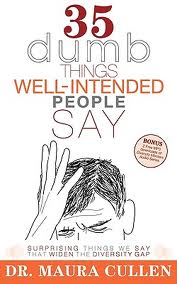 We tend to celebrate our pluralistic and richly diverse culture and, in the church, we talk long and loud about radical hospitality and open hearts/minds/doors.  Yet, we still seem to be having problems knitting our intercultural parts into a well-integrated body of Christ.  There is so much latent and subversive “-ism” — sexism, racism, classism, ageism, us/themism, colonialism, territorialism — that we cannot seem to all get on the same side at the same time.  Dr. Maura Cullen’s book, 35 Dumb Things Well-Intentioned People Say (Surprising Things We Say That Widen the Diversity Gap) is a great primer for anyone who truly wants to be more loving, kind, gentle, respectful, conciliatory, caring and graceful (by which, I hope I mean anyone who really wants to be Christian).  Those who bask (consciously or not) in power and privilege are often less than mindful of the impact of their words, regardless of their intention.  Cullen’s book calls us to take responsibility for the things we say, and to those of a Wesleyan bent, to truly live the standard of “first, do no harm”.

The book is essentially a compendium of Do’s and Don’ts (35 clear “don’ts…) that help us better understand how to communicate in effective and affirming ways.  Cullen helps shift perspective to the other side — what it is like to be on the receiving end of inappropriate, thoughtless, dismissive or even well-intended but harmful statements.  Her instruction is simple and straightforward.  It doesn’t much matter what we intend; our words are measured by their impact.  Thoughtless and offensive statements “pile on” over time, so that the general attitude behind any one comment can be magnified.  Defensiveness and attempting to justify oneself adds insult to injury, and mindlessly accepting power and privilege as a personal right while denying the same to others is unacceptable.  Most people are trying to be better and do the right thing, but words have power — they can be tools that build up or weapons that destroy.  Used thoughtlessly or irresponsibly, they do more harm than good.

As Christians, we should be champions of exemplary speech and careful communication.  Words that build us up while diminishing another are not good words.  When people of privilege or advantage say they are “color blind” or they “treat everyone exactly alike” or “some of their best friends are X” they are emphasizing that they are aware of difference and don’t care.  Those who live by the value of unconditional acceptance don’t have to tell people — the evidence is clear.  Only racists and sexists have to tell people they aren’t racists and sexists…

The ability to place oneself in the position of another is a key characteristic of basic maturity.  Further maturity is evidenced by the commitment to honor and value the other as highly as oneself.  We are not talking about mere tolerance or acceptance, but an affective union — a unity of heart, mind and spirit to model the deepest civility and the purest respect.  Such quality of relationships will not happen by accident.  We must make the commitment to intentionally love, respect, guard, protect, value and honor one another.  Sound impossible?  It’s biblical.

I recommend this book be read, studied, and discussed in every United Methodist Church.  It offers practical, down-to-earth, simple and helpful guidance for any Christian desiring to be just a bit more like Jesus.  It should be a must read for anyone interested in being a disciple.  Not everyone will like it, though.  Pay special attention to the people who like it least (the living models of what not to say).  They can teach us a lot.