I regularly encounter people who believe that disagreements in the church are evidence that we should split the denomination, that somehow we are defined by our differences rather than a common faith, a shared baptism, a risen Savior, and a God bigger than our pettiness.  Probing deeper reveals that the desire to divide is driving the conversation, and people wishing to distance themselves from “those people” look for any and all reasons and excuses to justify their position.  Any lengthy conversation about our differences reveals one of four fundamental approaches to navigating multiple perspectives and contravening opinions: 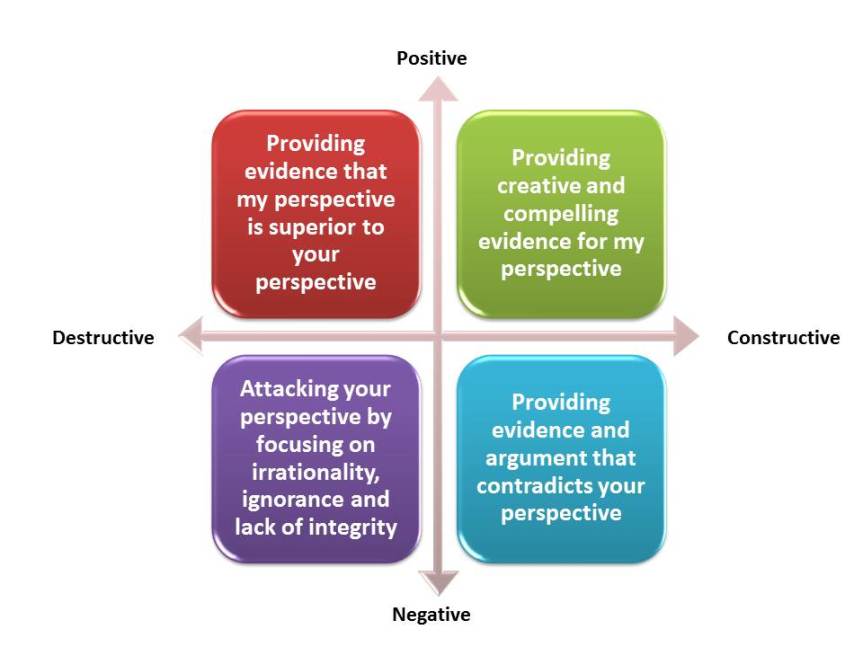 Disagreement can take one of four basic forms, ranging from very positive to very negative.  The most positive is advocacy of a new or different way of thinking.  Here, the commitment is to stay focused on all the positive aspects of a particular position.  This is a non-defensive way of adopting a perspective.  The underlying concept is that the positives are so substantial, compelling and influential that people will naturally and automatically see the superiority of the new idea.  Over time, evidence mounts until what was once controversial is understood to be true or real.  (Think Copernican revolution — a heliocentric universe rather than geocentric.)

Next on the positivity scale comes persuasion for a shift in perspective.  Few people are willing to readily abandon strong beliefs or opinions.  As human beings, we often take some convincing.  On the positive side, this requires that we develop a way to compare and contrast one perspective with another.  In the 1980’s, many office workers resisted moving from electric typewriters to word processors.  Even thought the keyboard was the same old Qwerty, this significant paradigm shift caused many to balk — the devil they knew was better than the devil they didn’t.  The immediate response to resistance was a very effective campaign to show all the benefits, advantages, special features, cost savings, etc., that the new technology offered over the other (including a reduction of paper… oh, well).  As benefits overwhelmingly mounted to offset costs, and gains shadowed losses, more and more people made the shift.  Try today to find a typewriter ribbon, cartridge, or IBM Selectric print ball.

The shadow side of persuasion moves us to heated debate, where an emphasis on the positive of the one idea shifts to a focus on the negative of the other idea.  Here, what is wrong with your thinking is more important than staying on message with what is good about my perspective.  This occurs when the evidence in support of one perspective is not as strong as the flaws and faults in another perspective.  For the past forty years, this form of disagreeing has framed the abortion conversation.  “Pro-life” and “pro-choice” have spent much less time presenting what is “pro-” about their own position.  Instead, they invest great time, energy and resources in attempts to undermine the message of the opposition.  Criticism masked as critique and contempt masked as concern all but guarantee that there will be little resolution or compromise in the conversation.  The Gay/Lesbian/Bi-sexual/Transgender/Queer (Questioning)/Intersexual (GLBTQI) conversation stands on the border between the third and fourth forms of disagreement.

In the fourth quadrant, debate shifts to disrespect as civility breaks down and we resort to attack.  Attack means that I will not only disagree with your perspective, but I will also impugn your character, your intelligence, your upbringing and parentage, your competence, and your ethics.   This is where the gloves come off and we resort to any and all devices to make our opponent look bad.  We don’t simply want to win, we want to hurt those who disagree with us.  We are vicious.  Of course, we act as if we are innocent and always and everywhere pretend we take the high road.  Unfortunately, folks who fight dirty are fooling themselves.  The pettiness, immaturity and injustice of personal attack is transparent and obvious.  This is one of the main reasons people give for leaving organized religion — they see “good Christians” engage in hostile, hateful, degrading attack (in the name of Jesus the Christ…).

I am reading Daniel Dennett’s, Darwin’s Dangerous Idea, and it is a fascinating blend of the four types of argument, and it illustrates the power of each quadrant of the matrix.  As with his other writings, when he posits a theory or concept and builds a positive, constructive argument for it, he borders on the brilliant.  He is reasonable, rational, and convincing.  Sometimes, he engages a careful and critical analysis, comparing and contrasting one perspective against another.  Once again he is strong.  But then he slips.  The moment he allows himself to shift from the positive to the negative he becomes(in my opinion) shrill and pedantic.  He quotes himself as evidence (citing his own earlier works as support for his own perspectives — a necessary practice for people who can’t find others who agree with them…) and his argument loses its rational, reasonable edge.  He becomes obsessed with disproving the opponents instead of proving his own perspective.  On certain issues, he completes the slide by calling (or insinuating that) those who disagree with his thesis are simple, ignorant, uninformed, backward, stupid and irrational.  He allows only his way of thinking as allowable or acceptable.  He provides the foundation upon which Richard Dawkins and others who attack religious faith build.  Dawkins is another excellent illustration of the four types of argument and disagreement.  His writing that posits a thesis then builds support are brilliant; his attack books are poorly reasoned and constructed.

The whole point of this is to say we have a choice in how we will disagree with each other.  Disagreement is not the problem — it is difficult to grow, learn, progress and evolve without disagreement.  But how we disagree is critical.  If we can commit to engage differences of thinking in the top two quadrants, we will get a whole lot farther than opting to stay mired in the lower two quadrants.  Generally, only those who have little confidence in their position need to resort to the lower two approaches.  With the conviction of the strength of our thinking comes the ability to stay focused in the positive.  Those who feel assurance in their thinking are not threatened by those who disagree.  It is only the uncertain and the unconvinced who attack the thinking of others.